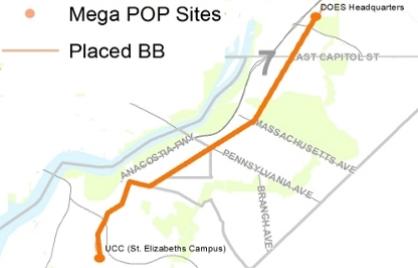 Mayor Vincent C. Gray and officials from the District’s Office of the Chief Technology Officer (OCTO) announced today that the first link in the DC government’s new high-speed fiber network, the DC Community Access Network (DC-CAN), has gone live with 100-gigabit-per-second (100G) service – enabling the kind of technology-infrastructure development vital to competing in a 21st-century economy.

The initial link serves communities east of the Anacostia River, but the ultra-high-speed network will soon serve the entire District – providing infrastructure not currently available on such a large scale anywhere else in the country, and doing so at affordable prices.

“With this 100G connection, we are making history by providing state-of-the-art network capacity that will serve the District’s economic growth well into the 21st century,” said Mayor Gray. “DC-CAN will help pave the way for greater broadband adoption across the District of Columbia, and I’m proud that we will be the first city in the United States to make such a forward-thinking investment in crucial technology infrastructure.”

This milestone makes the District the first city in the nation to build a network that is 10 times faster than typical service-provider networks today. The ultra-high-speed link allows “last-mile” service providers (who provide Internet access to end users) to take immediate advantage of low-cost services via DC-CAN – thus enabling them to bring affordable broadband services to residents and businesses in underserved areas of the city.

As the first city-owned 100G network in the nation DC-CAN positions the District to deliver cost-effective “middle-mile” services at ultra-high-capacity to government entities and private-sector Internet Service Providers (ISPs) well into the future. The network’s capacity surpasses that of other municipal networks in the country, including those in California’s Silicon Valley and other major tech hubs.

“As Internet use moves toward video and other data-intensive applications, this network is well positioned to support such next-generation apps without the need for further infrastructure upgrades for at least a decade,” said DC Chief Technology Officer Rob Mancini. “By expanding to an established 100G platform, the District has invested in an efficient and economically viable solution based on proven technology.”

Funded through a National Telecommunications and Information Administration infrastructure grant as part of the American Recovery and Reinvestment Act, DC-CAN brings middle-mile broadband services to areas of the city with adoption rates of less than 40 percent.

“We’re proud of our fiber crew and engineering teams’ efforts to aggressively complete both this first core link and also the distribution loops that enable community-anchor institutions to get broadband service,” said Tegene Baharu, Deputy Chief Technology for Citywide Technology Infrastructure Services at OCTO. This phase was completed only six months after the District broke ground on the project.

The 100G backbone links are expected to be complete in Wards 5, 7 and 8 within the next six months, and will extend to every ward in the District by June of 2013. Currently, there are 24 community anchor institutions whose DC-CAN connectivity is operational. By the end of the project in 2013, there will be 223 such institutions with connectivity to the ultra-high-speed network.