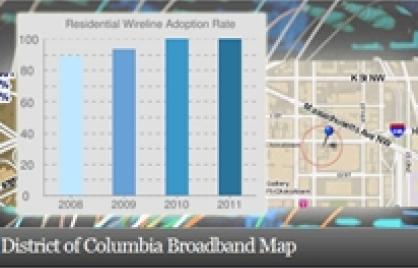 OCTO’s broadband map is the District Government’s first data-driven, comprehensive picture of broadband access and resources in the District. Created with Geographic Information Systems (GIS) technology, the map is interactive and allows users to view data associated with certain features of the map.

The new broadband map is funded by an American Recoverhttp://broadbandmap.dc.govy and Reinvestment Act (ARRA) grant from the National Telecommunications and Information Administration (NTIA). As part of its grant obligation, OCTO provided its District broadband map data to NTIA for use in the NTIA’s national broadband map, released February 17, 2011.

The map shows estimated residential broadband adoption rates by Census tract for the entire city. The residential broadband adoption rate is the number of households subscribing to wireline broadband, according to broadband providers’ filings with the Federal Communications Commission, divided by the number of households according to the 2000 Census. The map identifies the types of broadband providers (i.e., wireline or wireless) by location and their methods of transmission (e.g., copper wire versus DSL) and download/upload speeds.

The map also highlights major District broadband resources installed by OCTO. These include the free computers and high-speed Internet access in all of the District’s 25 branch libraries, as well as the over 250 free Wifi hotspots in and around government facilities throughout the city. Both the high-speed Internet in libraries and the free Wifi hotspots are powered by DC-Net, OCTO’s fiber-optic telecommunications platform that supports secure citywide data, voice, video, and wireless services for the DC Government.

“My administration is committed to bridging the digital divide and creating jobs for District residents,” said DC Mayor Gray. “By providing detailed data on both broadband needs and resources in the District, the map takes an important step toward our goal of expanding access to technology citywide, and especially in underserved communities.”

The District broadband map is one of a series of ARRA-funded OCTO initiatives aimed at bridging the digital divide and expand economic opportunity for District residents. Other ARRA-funded OCTO initiatives now under development include: conducting a citywide broadband outreach and awareness campaign; providing free computers, training, and subsidized Internet access for residents of underserved areas; and expanding the District’s DC-Net high-speed fiber network into a public access middle-mile network that anchor institutions and Internet service providers can access to deliver more affordable last-mile service to underserved communities.

“Bridging the digital divide means ensuring that people have access to computers, know how to use them, and have high-speed Internet access - at public venues, at work, and at home,” said Interim CTO Mancini. “With the support of our federal grants, we’re working on all these fronts. Our new broadband map is an important milestone in our work, as well as an important contribution to the national mapping effort.”